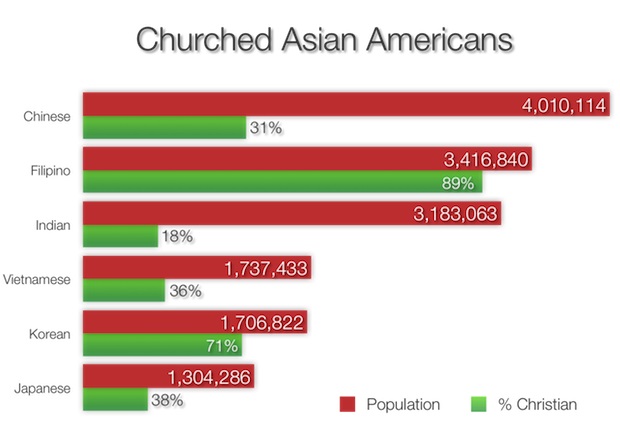 Furthermore, the Pew Center report compared and contrasted the receptivity of Christianity by an Asian ethnic group in America vs. the Asian country of origin:

These proportions generally reflect the religious composition of each group’s country of origin. The Philippines, for example, is heavily Catholic. In some cases, however, the percentage of Christians among Asian-American subgroups is much higher than in their ancestral lands. For example, 31% of the Chinese Americans surveyed are Christian; the vast majority, though not all, of this group come from mainland China, where Christians generally are estimated to constitute about 5% of the total population. Similarly, 18% of Indian Americans identify as Christian, though only about 3% of India’s total population is estimated to be Christian. The higher percentages of Christians are a result of the disproportionate number of Christians who choose to migrate to the United States and may also reflect religious switching by immigrants.

Let’s visualize these numbers as a side-by-side comparison of the Christian population in the Asian country of origin versus in the United States for the top 6 Asian American ethnic groups:

Notice the phenomena for almost every Asian ethnic group to have a much higher percentage of Christians in America than in their corresponding Asian country of origin.

This could be attributed to being in a country where Christianity has had a stronger influence historically and the evangelistic zeal that is characteristic of American Christianity.

I’ve also heard this tendency as being an indicator that Asians in America being more receptive to the Gospel. When people relocate to a new country, that disruption is a huge opportunity for changes in many areas, including one’s spirituality and religious affiliation.

It should also be noted that most (if not all) ethnic Asian churches are very intentional at providing practical ministries and services to the Asian immigrants. These good deeds open the hearts of immigrants to the Good News too.

What does all of this mean? First a couple of caveats to keep in mind. There are distinctly unique narratives and timelines for when each Asian ethnic group immigrated to the United States. This affects each group’s rate of assimilation into American culture, particularly for the next generations.

These statistics are useful as a point of reference that shows a big picture of Asian American Christians like an impressionistic painting with broad paintbrushes.  And we can see the different Asian ethnicities’ response to the Gospel and the difference between Asians in America versus Asians in America.

In other words, use these statistics to get some basic understanding about different Asian ethnicities but don’t overgeneralize or use these statistics against people by stereotyping. You have learned a little bit more, not a lot, and definitely not everything. To have some knowledge is better than ignorance.

As Christians come to faith, they also come together and organize into churches. These churches provide the tangible expression of their Christian faith that is particularly meaningful for Asian Americans and their cultural value for group-oriented cohesion.

Through my informal research, here are the estimated numbers of Asian American churches:

It’s reasonable to guess that a majority of these ethnic churches have worship services only in their respective Asian language, with a minority of them also having an English ministry, by necessity of ministering to the children of the immigrant families.

However, these estimates for the total number of Protestant ethnic Asian churches just don’t add up for me. An average church is usually under 100 in size, so 7,800 ethnic churches would reach around 780,000 people. That is far short of 4 million people that would be part of Protestant churches, if indeed 22% of Asian Americans are Protestant as surveys indicated.

This could mean a number of things: Asians, like other non-Asians, default their religious affiliation to Christianity; I’d say it’s unlikely that so many Asian Americans are attending non-Asian or multi-ethnic churches or thousands of ethnic Asian churches are unaccounted for.

What this does say is: we need a lot more churches to reach this fastest-growing demographic of Asian Americans.

In the next chapter, I’ll describe the common models of Asian American churches and how church governance is structured and organized for effective ministry.